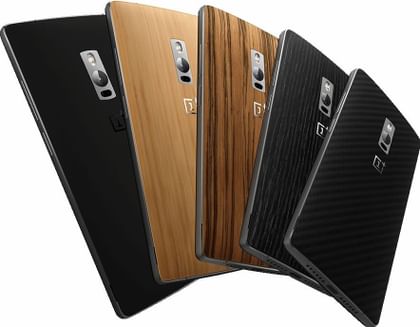 OnePlus 2 price in India starts from ₹24,999. It was available at lowest price on Amazon in India as on Aug 10, 2022. Take a look at OnePlus 2 detailed specifications and features.

Read More
This Mobile Phone is Out of Stock.
Set an Alert to know when it comes back in stock.
₹24,999
Search

#ExpertReview
By Smartprix • 7 years ago
OnePlus launched its first generation last year which was loved by all. But not everyone was able to use it because of the invite system. Now 2nd generation i.e OnePlus 2 has been launched in India. The expected price of OnePlus 2 in India is around 25000. Coming to its specifications it comes with 'Type C' USB Connector that allows you to transfer data at high-speed between devices and also it allows faster charging. It has 5.5 inch Full HD (1080 x 1920 pixels) resolution LCD display with Gorilla Glass protection. About its performance, the OnePlus Two runs on Android OS v5.1 Lollipop and it features Qualcomm Snapdragon 810 processor with 4 GB of LPDDR4 RAM that make its performance strong and allows you to run many applications at the same time. It has an internal storage of 64 GB which is big enough to store a huge amount of files, images, videos but this smartphone is a lack of removable storage slot. OnePlus 2 sports an 13 MP Camera at the back side with dual LED Flash and 4K video. The 5 MP Camera is available for selfies and video calling. Battery capacity of OnePlus Two is 3300 mAh capacity, which is quite impressive as comparing to many other products. But the battery is still non-removable though. The OnePlus Two also comes with a new type of fingerprint scanner that is much Accurate and Precise. On Comparing, this handset is found better than S6, HTC One E9 Plus and even iPhone's own Scanner. It makes your device more secure. You don't have to put any pin number or draw-pattern which people may notice and try to get access into your device. So new scanner keeps your info safe.
Read Full Review →
VIEW ALL EXPERT REVIEWS (8) →

One plus 2 is looking royal and great.but it's not worth of its price.the only thing is it had mentioned that it's memory is 16GB but it contains 9.72GB.never buy 16GB,try for 64GB

Great superb what a phone ah