Asus ROG Phone 3 price in India starts from ₹46,999. It was available at lowest price on Flipkart in India as on Sep 30, 2022. Take a look at Asus ROG Phone 3 detailed specifications and features.

Read More
This Mobile Phone is Out of Stock.
Set an Alert to know when it comes back in stock.
₹46,999
Search 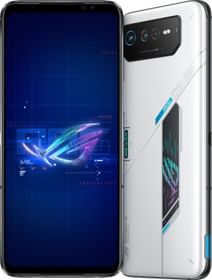 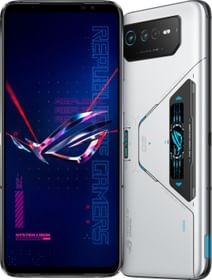 Asus Rog Phone 3 is a gaming smartphone from the Taiwanese smartphone company. Asus has introduced next-level gaming phones by bringing the best hardware for the series. The phone is powered by a premium Snapdragon 865+ SoC coupled with 8GB of RAM and 128GB of internal storage. A 6.5-inch AMOLED display is fitted with the phone that refreshes at 144Hz. The phone sports a 64MP triple rear cameras and a 24MP front-facing camera. Gaming phones need better power backup and for that Asus Rog Phone is packed with a 6,000mAh battery with 30W Rog Hyper charging support. Let’s read the details of Asus Rog Phone 3 and see how capable this phone against its competitors.

Rog Phone 3 comes with a 7nm+ process Snapdragon 865+ SoC with 8-performance cores. The processor of the phone clocks at a speed of 3.09 GHz. The phone runs on Android 10 with a skin of ROG UI out of the box. It is integrated with 8GB of RAM for the background tasks and houses Adreno 650 GPU for the graphic demands. Gamers may consider looking at this phone. Userfriendly sensors like Light sensor, Proximity sensor, Accelerometer, Compass, Gyroscope are all present on the phone.

Asus Rog Phone 3 has a 64MP triple rear-shooters followed by a 64MP main sensor coupled with a 13MP of an ultra-wide camera, and a Macro camera of 5MP with autofocus. For selfies, it has a 24MP front-facing camera. As far as the recording is concerned, the rear shooters can record FHD 1080p videos @30fps. Basic photography can be easily sorted on this Asus Rog phone3.

Asus Rog Phone 3 has 128GB of UFS3.0 storage. This 128GB storage may satisfy storage needs but a reminder that it lacks any sd-card slot.

Asus Rog Phone 3 comes with a 6,000mAh battery, which fits for long gaming sessions. The battery size is ample and may give a day of backup under average usage. Also, you get a 30W Rog Hyper charger out of the box.

Asus Rog Phone 3 connectivity includes 3G, 4G, 5G(in selected markets) VoLTE for HD voice and video calls on Jio network, WiFi, Bluetooth5., and USB-C. Also, it has NFC which can be useful for payments and transferring small payload of data. For navigation, it features constellation like GPS with A-GPS, and GLONASS.

Gaming beast in the world

This phone is worlds best gaming phone. Which can be affordable for middle class people also. It also has a google stadia due which we can play all the game that we can play in PS4. It also give many specification for improving the game of gamers. It has a double screen support through which we use two items at one time. It also has many things. Very very very very very very good phone. I always Asus for thinking about gamers so much. :😍😍😍THANK YOU😍😍😍:

When Asus ROG Phone 3 is launching?

What is the processor of Asus ROG Phone 3?

The processor of Asus ROG Phone 3 is snapdragon 865+.

How much is battery capacity of Asus ROG Phone 3?