Sony Xperia C price in India starts from ₹9,000. It was launched on September 18, 2013. It was available at lowest price on Flipkart in India as on May 07, 2021. Take a look at Sony Xperia C detailed specifications and features. 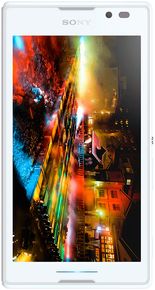 Sony Xperia C specification includes, it weighs 153 grams and thickness is 8.88 mm. The front of the phone houses the earpiece in the top middle, with the front-facing camera and ambient light sensor hugging the top right portion. The speaker encasing for the microphone at the bottom. Right above that one is a very minimalistic notification LED light, best described as a strip. Taking a look at the back, its better-looking halve, with its matte plastic finish. All hardware buttons have taken a residence on the right profile of the device.

Sony Xperia C comes with 4 GB internal memory, of which only 1.21 GB is available for users to store their content. There is a 32 GB expandable memory slot. It features with an 8 MP rear camera and a 0.3 MP front camera. A single LED flash is provided alongside the rear camera. It also comes with a dedicated camera key as well. Now click high quality pictures, edit them, create animated images or make a beautiful picture collage. It include the function like Touch Capture, HDR, Picture Effect, Sweep Panorama, Scene Selection and more.

In addition to this, while playing games and watching movies on Sony Xperia C there is no risk of accidentally pressing the power button, which normally happens in other handsets that have the power button at the top. There is also an amazing feature in which by the Walkman application you can create multiple playlists with all your favorite songs and share them instantly with your friends by linking your favorite songs on Facebook and also get the music updates that your friends share.