OPPO A15 price in India starts from ₹9,999. It is available at lowest price on Flipkart in India as on Jan 29, 2023. Take a look at OPPO A15 detailed specifications and features.

Oppo presents another affordable A-series smartphone Oppo A15 with cool specifications onboard. On the camera side, the phone sports a 13MP triple rear camera set up and a 5MP front camera. Under the hood, the smartphone houses a MediaTek Helio P35 SoC assisted with 3GB of RAM and 32GB of internal storage. Oppo A15 is backed by a 4230mAh battery and is fitted with a 6.5-inch HD+ display with a waterdrop notch. Let’s read more about the phone and see how capable this Oppo A15 is.

Oppo A15 comes fitted with a 6.5-inch IPS LCD multitouch display with a waterdrop notch. The display has an HD+ resolution of 720x1600px with a pixel density of 269PPI. The aspect ratio of the phone is 20:9 with a screen to body ratio of 83%. Based on the configuration, the display seems decent and is expected to produce better visuals. Also, the display has a reasonable size for dealing with the daily tasks on the phone.

Oppo A15 sports a 13MP triple rear camera with an LED flash. The main 13MP camera is coupled with a 2MP macro camera and a 2MP depth sensor with autofocus. Decent photography is expected from the camera. Also, you can click portraits and macro shots. For selfies and video calls, there lives a 5MP camera inside the waterdrop notch. As far as the recording is concerned, you may record FHD 1080p videos @30fps using the main rear camera.

Oppo A15 runs on the Android 10 operating system out of the box. The phone houses a MediaTek Helio P35 chipset with octa-core processors. This 12nm process chipset may sort out basic performance on the phone but might not enough for intense gaming. For the background performance, the phone has 3GB of RAM while PowerVR GE8320 GPU renders graphics for the apps and games. User-friendly sensors like Accelerometer, Gyro, Proximity, and compass are present to better the user experience.

Oppo A15 is backed by a 4,230mAh Li-Po battery underneath. Judging upon the battery size, a full day of power back up is expected under normal usage on the phone. Also, you get a proprietary charger out of the box.

Oppo A15 has 32GB of internal storage capacity for stuffing apps and games. Also, the phone has an extra card slot that stretches the storage limit up to 256GB. You get more space for music, movies, videos, photos, documents, etc.

Oppo A15 has the usual sets of connectivity options that include 3G, 4G, VoLTE for HD voice calls, and video calls on supported Jio networks, WiFi, Bluetooth v5.0, Micro USB v2.0 with OTG supported. For online navigation, the phone supports GPS with A-GPS, Glonass, and BDS. For security unlocks, Oppo A15 has a rear-mounted fingerprint sensor.

Does OPPO A15 support 5G network?

Does OPPO A15 support memory card?

How much is the battery capacity of OPPO A15?

Does OPPO A15 supports fast charging?

What would be the price of OPPO A15?

When OPPO A15 is launching?

easily one of the best by Oppo at the price

Oppo Reno 8 recently made its debut in the Indian market as well as the global market. Currently, it is being said that Oppo is already working on the Oppo Reno 9 series smartphones. Popular tipster Digital C…

A host of new A-Series smartphones from Oppo are now available for purchase in Indian stores. A retailer Manish Telecom shared that the Oppo A17 and the Oppo A77s can now be bought in India via offline retail… 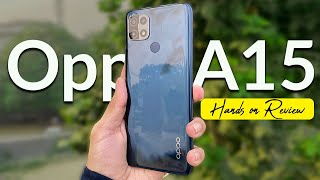 Oppo A15 Unboxing & First Impressions (हिंदी में) | Must Watch Before You Buy !!

OPPO A15vsXiaomi Redmi A1 Plus