HTC Radar price in India starts from ₹8,990. It was launched on February 20, 2013. It was available at lowest price on ShopClues in India as on May 16, 2021. Take a look at HTC Radar detailed specifications and features. 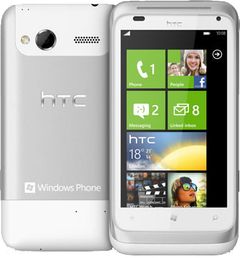 75
Expert Rating
Good
Based on 13 Reviews
Positive:
9
Mixed:
1
Negative:
0
NA
GSM Arena
HTC Radar review: Mango on the radar
So, users of the HTC 7 Trophy can look at the Radar in disbelief all they want. Yes, its the same phone theyve been having for a year now. The Radar wont stare back at them. Although, its got a few things to show: unibody, wireless hotspot functionality courtesy of Mango, a better screen and camera (not so much for the wide-angle lens and backlit sensor as the simply better looking photos).

Anyway, the Radar is not for anyone looking to upgrade from the Trophy or the Mozart.read more →
NA
GSM Arena
HTC Titan and HTC Radar hands-on: HTC media event
The HTC Titan was expected - all manufacturers are pushing for bigger screens. Jumping straight to 4.7" is a bold move by HTC. Keeping it slim was great too - large phones are sensitive to kind of thing and feel like bricks if they are too thick.

We're also glad to see the faster CPU but we're not too sure about the RAM. Or the 720p video recording. And last time HTC tried a unibody like that, things didnt work out too well for the antenna.read more →
NA
Engadget
HTC Radar
If you're undeterred by the Radar's few limitations, it's easily among the most satisfying Windows Phone devices on the market today.

With its smaller screen, slower CPU and lower-res camera, it was easy to overlook the Radar as it debuted alongside its larger, bulkier sibling, the HTC Titan. Even we were blinded by shock and awe, but after spending time with the little guy, we must say we're quite smitten.read more →
70
PC Mag
HTC Radar 4G (T-Mobile)
The HTC Radar 4G is a solid Windows Phone 7 device that could easily win some converts over from an Android or iOS handset.read more →
70
TechRadar
Could the Titan's little brother bring Mango to the masses?
We would love it if we could divide this review into two parts: one for the HTC Radar's build and calls and one for the operating system. Unfortunately we can't, so this all has to be mixed in together, which is why we're only able to give the HTC Radar 3.5 stars out of 5.

The build is top notch, and it feels like a good, solid device. But HTC's rubbish memory allowance and lack of battery is just too much for us.read more →
Show More