After its global debut back in February at MWC 2019, Nokia 3.2 has finally arrived in India. This is HMD Global’s second launch this month. Earlier, the company announced Nokia 4.2 with Android One and Dual Rear Cameras. The Nokia 3.2 is basically a trimmed down version of Nokia 4.2 with the same primary camera, a larger 4000 mAh battery, and a bigger display.

Upfront you get a smaller 5MP (f/2.2) selfie shooter residing within a waterdrop notch. Turn to the back, you get a single 13 MP (f/2.2) rear camera. Beneath the camera panel stays a circular fingerprint scanner, Nokia and Android One branding. Unlock the device using the reader or face unlock to use the Android 9.0 Pie OS from the Android One stable.

Weirdly enough, the fingerprint scanner is available only on the 32GB variant. Speaking of storage options, you also get a 16GB model. Both of them are further expandable via microSD card up to 400GB.

Another major jump from the Nokia 4.2 is its 4000mAh battery, which as per the company could last up to two days, and has a music playback time of up to 98 hours using an earphone. This budget entrant draws power from a Qualcomm Snapdragon 429 chip that is coupled with 2GB or 3GB of RAM.

A neat addition to the on-device buttons is a dedicated Google Assistant button. You also get connectivity solutions and other features such as 4G VoLTE, Wi-Fi 802.11 b/g/n, Bluetooth v4.2, GPS/ A-GPS, FM radio, a 3.5mm audio jack, and a Micro-USB port. Nokia also packs standard sensors such as an accelerometer, ambient light sensor, and a proximity sensor.

The Nokia 3.2 will hit the shelves for the first time in India later this week on May 23, via top retail outlets and the Nokia site. You could grab it in Black and Steel color editions.

If you’re an Idea or Vodafone user, as a part of the launch offers, you could avail Rs. 2,500 instant cashback in the form of 50 vouchers of Rs. 50 each. You could redeem them against recharges of Rs. 199 and above.

Under the HDFC consumer finance scheme, if you’re its user, you could use credit, debit, and EMI transactions through Pinelab terminals at offline stores and get 10 percent cash back until June 15.

Nokia 4.2 launched in India with Android One and Dual Rear Cameras

HMD Global has finally launched the Nokia 4.2 in India, 2 months after its official debut at MWC 2019. The Nokia 4.2 is an affordable phone powered by Series 400 Qualcomm chipset that sports a waterdrop notch. It is part of Google’s Android One programme and also has a dedicated Google Assistant button to trigger …

HMD Global has unveiled a bunch of phones today. This includes the Snapdragon 662 wielding Nokia 5.4 and an entry-level Android Go-based Nokia C1 Plus. Both the phones look their part. While the mid-ranger Nokia 5.4 sports a punch-hole display and quad-camera setup at the back, the C1 Plus has got thick bezels and a …

Nokia 2.4 has arrived in India. The brand’s budget contender sports a 6.5-inch HD+ display, 4,500mAh battery, and MediaTek Helio P22 chip, amongst other things. As it’s traditional with Nokia Android phones, you get stock-esque software. Here are the phone’s full details. ALSO READ: Samsung Galaxy A02s and A12 with 6.5″ display, 5000mAh battery go … 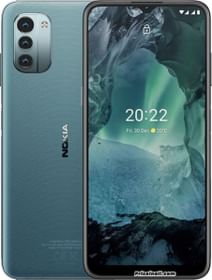