MWC 2019 is one of the most exciting time for mobile tech as brands bring out their novelties out to the world. Its been just a few days since the Galaxy Fold Launch and here we have the Huawei Mate X. Straight off the bat, this one’s folding mechanism and screen continuum is different. The support for the 5G network is simply icing on the cake. So, let’s see what else this device has to offer.

Contrast to the Samsung Galaxy Fold’s book like structure, this one has an OLED polymer display enveloping the phone shell. Fold or Unfold, either case, the display is on the surface. Unfold it and you have a flat somewhat squarish 8.0-inch tablet display without any gap in the middle. And fold it to have a front screen of 6.6-inches and the rear screen of 6.38-inches. So, in this state, you have a dual-display smartphone. The ON screen switches the side as you turn the phone. 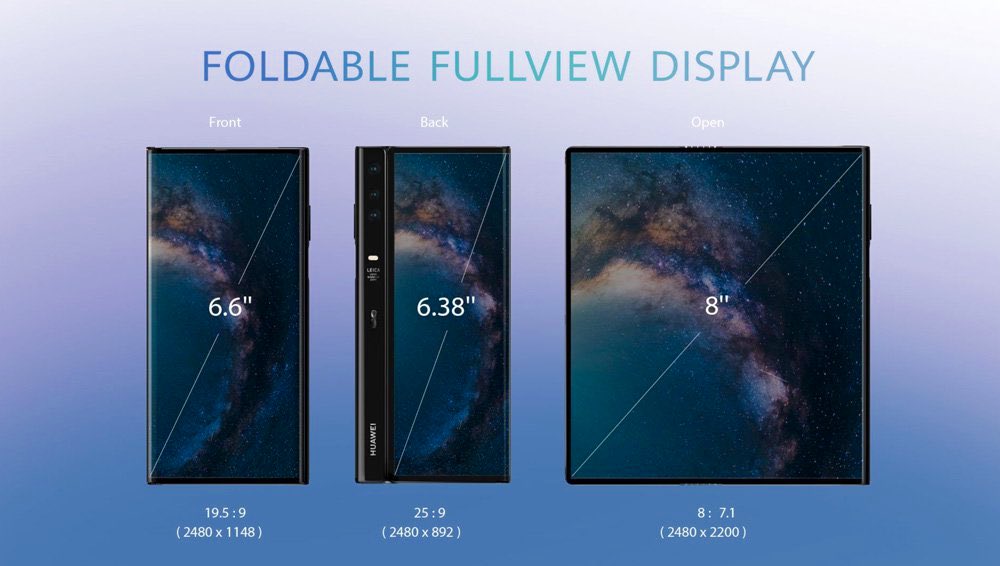 The device is very thin and when wrapped, it has a thickness of 11mm only and in the unfolded state, this slims down to 5.4mm. It has minimal bezels on the sides. Apart from these, a thicker curved right-side edge makes it a fairly handy device. Huawei calls the curved edge a “wing”.

Perfect your pose. Mirror shooting lets you see your picture as it's being taken. #HUAWEIMateX #ConnectingTheFuture #MWC2019 pic.twitter.com/FMt0vAZVtK

Though Huawei’s patented Falcon Wing design looks impressive, especially since it unhinges flat. However, if the company had gone for a perfect square display, it would have been a thumbs-up for Instagram.

Under the hood, it runs on Kirin 980 SoC with Balong 5000 5G modem. Huawei bets on the fastest network speed which could be tested once 5G rolls out. It would be powered by a 4,500mAh battery coupled with a 55W SuperCharge technology, which could fuel the Mate X to 85 percent in 30 minutes. If you’re wondering, the port would be USB-C.

On the memory department, we have 512GB internally and 8GB of RAM. The power button would act as the fingerprint reader. From the press event, the software seems fluid and responsive. However, we don’t have an update on the Android version. It could be EMUI 9.1 based on Android 9 Pie. It would be a Dual-SIM device supposedly nano-ones.

The Chinese giant would be on sale in select markets (names To Be Announced) around June or July. It is priced at 2,300 euros, which is a bit steep. And yes, it most likely won’t launch in the US.

What is DigiLocker? Is it Safe? Everything You Need To Know...