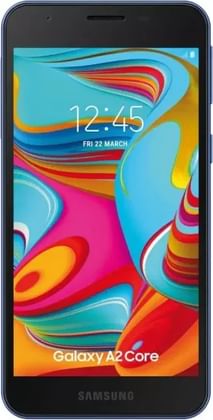 Read More
This is an Upcoming Mobile Phone. Samsung Galaxy A01 Core is expected to launch soon.
Set an Alert to know when it launches.
₹4,999
Search

Samsung Galaxy A01 Core expected price in India is ₹4,999. 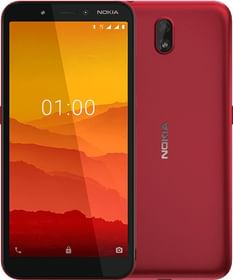 Galaxy A01 Core comes with a 5.3-inch color TFT display. This multi-touch panel has a resolution of 720x1480px which amounts to 311PPI on a 18.5:9 aspect ratio panel. The screen has a fair size but with the given PPI, you can’t expect visuals to be that sharp and clear. Also, like most of the entry-level phones, it also has thick borders all around it.

Samsung Galaxy A01 Core is solidly built and has a plastic back finish with a plastic frame on the sides. The phone stands at approx 141mm of height and has 8.6mm thickness. The volume rockers and the power button is placed on the right side. Also, a headphone jack lies at the bottom of the phone. Galaxy A01 Core is available in three different colors Black, Blue, and Red.

Samsung Galaxy A01 core sports a single 8MP(f/2.2) rear camera with features like HDR, Panorama, and autofocus. For selfies and video calls, it houses a 5MP camera that can also record 1080p videos. As far as the video recording is concerned, you can record FHD 1080p videos @30fps using the rear camera. You may expect decent photography from this entry-level Galaxy phone.

Galaxy A01 Core is driven by a 28nm process MediaTek chipset with quad-core processors. The phone runs on the Android v10(Pie) operating system out of the box. This Galaxy phone comes with the Android Go edition. Galaxy A01 Core has only 1GB RAM which is poor. For graphics rendering, it has a PowerVR GE8100 GPU which is also average but reasonable at this price point. The phone also includes user-friendly sensors like accelerometer and proximity.

Galaxy A01 has an average 3,000mAh removable battery. We don’t see removable batteries as often these days. These batteries are easier to replace and can be a help when your phone freezes. Based on the battery size, you may expect a day of power back up under minor usage of the phone

Galaxy A01 Core has 16GB of internal storage capacity that can be used for stuffing apps and games. Also, the phone supports an extra micro-sd card slot to expand the storage.

Write a Review
4.1
86 ratings
Be the first to write a review
WRITE A REVIEW →

Samsung Galaxy A01 CorevsJio JioPhone Next