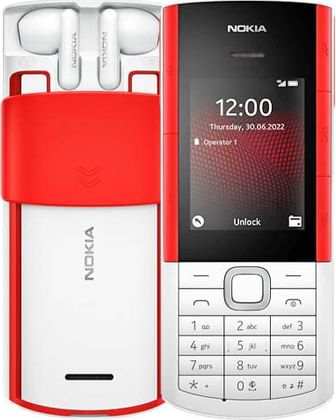 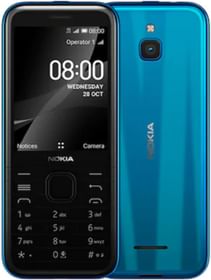 Nokia 5710 Xpress Audio is a feature phone with built-in earbuds and a nostalgic design. This is another addition to HMD Global’s feature phone lineup after the Nokia 8210 and 2720v flip phone. The new Xpress Audio phone comes with major upgrades and features over its predecessor – it includes a built-in MP3 player, Dual-sim card support with 4G connectivity, a micro SD card slot, Bluetooth 5.0, and multiple Gameloft games are added. Let’s jump into the details and find out more about the phone.

Nokia 5710 Xpress Audio mobile phone comes with a nostalgic design that can remind us of the old Xpress music phone. However, it comes with slight changes such as dedicated music controller buttons, and volume rockers, and has a slim and sturdy slider on the back that houses the wireless earbuds.

The phone includes a 2.4-inches color TFT display with a 4:3 aspect ratio. It has a QVGA resolution of 240x320px with a pixel density of 143ppi. The display has a reasonable size and it offers more than 32% of the screen-to-body ratio. It measures 138.9x57.7x16.2mm and weighs around 129.1 grams. As for the colors, the phone is available in Black & Red and White & Red color options

Nokia 5710 Xpress Audio mobile phone runs on the S30+ operating system and is powered by a Unisoc T107 chipset. The feature phone ships with a pair of wireless earbuds that might appeal to music lovers. It has a slider on the back where the earbuds stay and gets charged. Besides, the phone includes the classic Snake game and has multiple Gameloft games like AirStrike, Tetris, Arrow master, etc.

Nokia is popular for their long-lasting battery backup phones and considering that the device is expected to carry forward the legacy. This Nokia feature phone packs a 1450mAh non-removable battery and is claimed to deliver up to 6 hours of talk time on a 4G network and has up to 20 days of standby time.

Nokia 5710 Xpress Audio feature phone comes with 128MB of internal storage that can be used to keep phone contacts, messages, etc. On top of that, the phone includes a dedicated micro SD card slot (supports up to 32GB) that allows storing thousands of songs on your Nokia phone.

As far as the connectivity is concerned, the phone has 3G, 4G, Bluetooth 5 with up to 10-meters of wireless range, a browser, a micro USB charging port, and a 3.5mm headphone jack. A reminder that it lacks location tracking or GPS feature.