Xiaomi Mi 10i price in India starts from ₹17,994. It was available at lowest price on Croma in India as on Feb 05, 2023. Take a look at Xiaomi Mi 10i detailed specifications and features.

Read More
This Mobile Phone is Out of Stock.
Set an Alert to know when it comes back in stock.
₹17,994
Search

Xiaomi Mi 10i comes under the Mi 10-series lineup. Unlike its flagship twins Mi10 and 10 Pro, Xiaomi Mi 10i is a mid-range smartphone with a 6.6-inch 120Hz full HD+ display with a 16MP punch-hole camera. Under the hood, the phone has a Snapdragon 750G Octa-Core processor integrated with 6GB of RAM and 128GB of UFS2.2 storage. Xiaomi Mi 10i runs on the latest Android version 10 and has an on-screen fingerprint sensor. Let’s read more about Xiaomi Mi 10i and see if it is worth buying.

Mi 10i Display and Camera

Mi 10i smartphone brings a 120Hz full HD+ display with a punch-hole notch. It has narrow bezels and chin with more than 84% of screen to body ratio. The smartphone comes fitted with a 6.6-inch display with a resolution of 1080x2400px. It has a pixel density of 395PPI and a layer of Gorilla Glass protects the display from unwanted falls.

Xiaomi Mi 10i smartphone features 108MP quad-rear cameras with Dual-tone flash. It has a 108MP wide camera backed by a 118˚ ultra-wide 8MP camera, and a pair of 2MP’s of a macro camera and a depth sensor. Besides, you can record 4K UHD videos @30fps that offer stable videos. For selfie lovers, there’s a 16MP punch-hole camera that can also record 1080p videos @30fps. The phone is expected to give a decent camera performance.

Mi 10i Performance and Battery

Mi 10i smartphone runs on Android 10 with custom MIUI 12 on top. Under the hood, the phone has Qualcomm’s 5G enabled Snapdragon 750G octa-core processor that ticks at a clock speed of 2.2Ghz. Mi 10i has 6GB of RAM to improve its background performance while Adreno 619 GPU accelerates graphic rendering. Xiaomi Mi 10i comes with an IP53 rating that protects it from dust ingress and water-resistant. Mi 10i has a side-mounted fingerprint sensor for security unlocks.

Xiaomi Mi 10i is backed by a 4,820mAh Li-Po battery and comes with a 33W fast charger out of the box. You may expect a full day of battery life under normal usage of the phone.

Mi 10i Storage and Connectivity

Mi 10i supports 3G, 4G, 5G(in-selected markets), and features VoLTE that offers HD voice calls and video calls on Jio networks. You get WiFi, Bluetooth 5.1 that offers fast pairing and stable connection, it has a v2.0 Type C port, and an IR blaster that makes your phone compatible with IR devices. For real-time navigation, it has constellations like GPS with dual-band A-GPS, Galileo, QZSS, GNSS, GLONASS.

#ExpertReview
By Smartprix • 2 years ago
Xiaomi Mi 10i has all the ingredients needed for a disruptive online blockbuster and then some. The long list of great-haves includes class-leading performance hardware, stereo speakers, 108MP camera, expandable storage, audio jack, IR blaster, fast charging, and a fast side-mounted fingerprint reader. So, yes, indeed there is a lot to look forward to here and that too at a very alluring price.
Read Full Review →
VIEW ALL EXPERT REVIEWS (1) →

How much is battery capacity of Xiaomi Mi 10i?

What would be the price of Xiaomi Mi 10i?

When Xiaomi Mi 10i is launching?

Sony is reportedly working on a new variant of PS5 that will be most probably named PS5 Pro. A report published by PhonAndroid revealed the tentative launch timeline of the PS5 Pro along with a glimpse of wha… 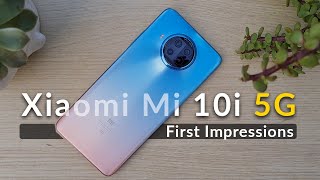