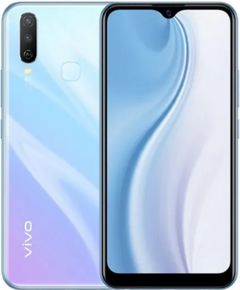 Vivo Y3s is an entry-level phone under Vivo’s popular Y-series smartphone. The smartphone packs 13MP dual rear cameras and a big 5,000mAh battery underneath. For performance, an Helio P35 octa-core processor assists the phone along with 4GB of RAM. The smartphone includes a 6.3-inch HD+ display with a waterdrop notch and a rear-mounted fingerprint sensor for security unlock. Let’s have a read about the phone in detail and see what else it hides.

Vivo Y3s brings a 6.3-inch color IPS LCD multitouch display. The screen has an HD+ resolution of 720x1544px which amounts to 268PPI. The phone comes in an aspect ratio of 19.3:9 with more than 81% of screen to body ratio. The panel has a thick notch at the bottom with slim bezel-lining around it. The display on the phone is tall and based on the details, decent visuals are expected.

Vivo Y3s sports 13Mega-Pixel dual rear cameras with an LED flash. The main 13MP camera with aperture f/2.2 is coupled with a 2MP depth sensor with autofocus. The camera has an HDR mode that can be used to click pictures with decent color details. As far as the selfies are concerned, the phone houses an 8MP camera inside the notch. For video recording, you may record FHD 1080p videos @30FPS using both the front and the rear camera.

Vivo Y3s runs on the Android 9(Pie) operating system with custom Funtouch9 OS on top. The smartphone is backed by an entry-level MediaTek Helio P35 on a 12nm processed chipset. It has a 2.3GHz octa-core processor coupled with 4GB of RAM that helps in better the background performance. For rendering the graphical inputs, the smartphone houses a PowerVR GE8320 GPU. For unlocking the phone, there’s a rear-mounted fingerprint sensor.

Vivo Y3s comes with a massive 128GB of internal storage capacity for storing apps and games. Also, the phone supports an extra card-slot that makes more space for music, videos, photos, movies, and other files.

Vivo Y3s houses a big 5,000mAh Li-Po battery and gets charged from a 10W proprietary charger out of the box. Judging upon the battery size, a full day of battery life is expected on normal usage on the phone. Also, the battery capacity may be preferred by heavy users who like budget with bigger batteries.