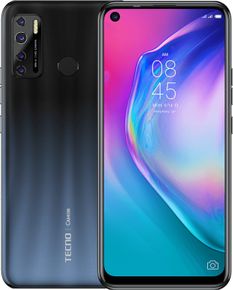 Tecno Camon 16s is an entry-level smartphone that comes under the Camon 16 series which is the successor of the Camon 15 series. The phone comes fitted with a 6.6-inch punch-hole display with HD+ resolution(720x1600px). Under the hood, Tecno Camon 16s houses a MediaTek Helio P22 SoC coupled with 4GB of RAM and 128GB of internal storage. For the camera performance, the phone includes a 48MP quad-rear camera set up and an 8MP camera at the front. The phone gets charged from a 5,000mAh battery underneath. Let’s read more about Tecno Camon 16s in detail and see how capable this phone is against the other budget smartphones.

Tecno Camon 16s brings a 6.6-inch color IPS LCD multitouch panel with a punch hole notch. The screen has an HD+ resolution of 720x1600px with a pixel density of 266PPI. Based on the configuration, the display is expected to produce sharp pictures for better viewing results. The screen has fewer bezels around with a thin notch chin at the bottom. The display has a reasonable size for assisting with daily tasks on the phone. Also, the aspect ratio of the phone is 20:9.

Tecno Camon 16s has a setup of 48MP quad-rear camera with a dedicated LED flash. The primary 48MP camera is coupled with a pair of 2MP’s of a macro camera and a depth sensor and lastly, an AI camera with autofocus completes the setup. Shots like portraits, macro images, and decent snaps can be captured using the camera. Also, the camera has an HDR mode and Quad-Panorama feature. On the front side of the phone, there’s an 8MP camera inside the punch hole. As far as the video recording is concerned, you may shoot FHD 1080p videos @30fps.

Tecno Camon 16s runs on the Android 10 operating system out of the box. The phone gets assisted from a MediaTek Helio P22 SoC having octa-core processors. For the background tasks or multitasks, the phone relies on 4GB of RAM, whereas the PowerVR GE8320 GPU handles the graphic performance of the phone. User-friendly sensors like Accelerometer, Gyro, Proximity are present. The performance of the phone seems average but within the price tag, it has reasonable specifications.

Tecno Camon 16s has a 5,000mAh Li-Po battery underneath. The battery size seems a reasonable fit for running its 6.6-inch display. A full day of power back up is expected under the normal usage of the phone.

Tecno Camon 16s comes with 128GB of internal storage capacity. Buyers may use this storage space for stuffing apps and games. A reminder that the phone lacks any extra storage card slot that limits the storage capacity.