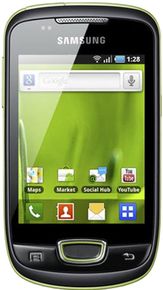 NA
Expert Rating
Very Poor
Based on 1 Reviews
Positive:
0
Mixed:
0
Negative:
0
NA
GSM Arena
Samsung Galaxy Mini S5570 Review: Right on the mini
So, did the Samsung Galaxy Mini S5570 give its best? It most certainly did but it would be no surprise if you failed to notice. You see, we can go on and on about value for money and delivering results within budget. But that wont be telling the whole story about a phone like the Galaxy Mini.

The overall look and feel of the device is very good and the build quality is actually pretty solid. The Galaxy Mini S5570 is definitely a looker and if green is your color, you will definitely find it attractive.read more →

Write a Review
74
User Rating
Good
Based on 5 Reviews
Positive:
4
Mixed:
0
Negative:
1
80
#Slenderman
Samsung Galaxy Pop S5570 Review
Nice Phone....cheap & best android mobile
0
0
Add Comment (0 total)
80
faizal
super mobile
i buy these phone on 2011july, till now no problem at these time lots of time fell down from the bike,till no problems.these phone very hard similarly like as nokia 1100
0
0
Add Comment (0 total)
80
Shruti
My Best Friend Since 2 years!
I bought this phone on June 2011 and this was my first phone. And it's been the best! Trust me. I know it is now a old model, but the features they provided were far more awesome! Many similar phone like pop came..but nothing could beat this! It's been a flawless phone ever since then. Yes like any other handset, this phone too got crazy sometimes, and sometimes due to my callousness I had to reboot but apart from that THERE IS NO OTHER COMPLAIN. It's been an amazing mate. So easy to access and the touch was was good. But now (August 2013) it's time to say goodbye. There was some internal damage: a motherboard problem, and it required quite a sum for repairing so I thought why not add few extra and buy a new phone. Apart form everything, I can say I have utilized every penny of this phone. It was worth the buy. It's been an amazing time with this phone. Now I hope that the new phone which I am buying will be as 'trust and buy-worthy' as this one. :)
0
0
Add Comment (0 total)
30
Syed Faiz Quadri
Just on Average Line
Not so good, but a bit bad, very laggy, slow, dull, low resolution, low memory,
0
0
Add Comment (0 total)
100
ishpreet
mobile
it is very good mobile
0
0
Add Comment (0 total)
Show More
Write a Review
Discussions