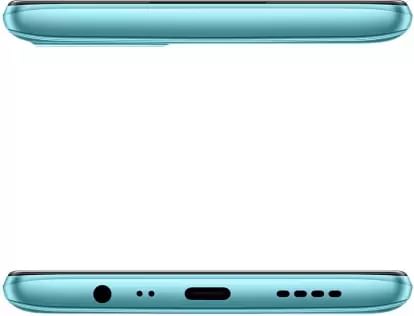 Realme Narzo 30A price in India starts from ₹8,607. It was available at lowest price on Amazon in India as on Sep 25, 2022. Take a look at Realme Narzo 30A detailed specifications and features.

Read More
This Mobile Phone is Out of Stock.
Set an Alert to know when it comes back in stock.
₹8,607
Search

Realme Narzo 30A is a budget-friendly smartphone loaded with impressive features onboard. The phone comes with a 6.5-inch HD+ display with narrow bezels around. Under the hood, it has an Helio G85 octa-core processor paired with 3GB of RAM and 32GB of inbuilt storage. Realme Narzo 30A gets juice from a 6,000mAh battery and supports fast charging. Let's have a look at the specs of Realme Narzo 30A and see what else it has to offer.

Realme Narzo 30A Display and Camera

Realme Narzo 30A brings a 6.5-inch IPS LCD display with a bezel-less design with more than 89% of a screen to body ratio. The screen comes with a resolution of 720x1600px that amounts to 270PPI. Besides, the display has a waterdrop notch and a slim chin-notch.

The smartphone flaunts dual-rear cameras with an LED flash. The primary 13MP camera is coupled with a secondary 2MP depth sensor with autofocus. It offers basic camera features such as face detection, touch to focus, autoflash, digital zoom, etc. On the front side, Realme Narzo 30A offers an 8MP selfie camera that can also be used for face unlock.

Realme Narzo 30A Performance and Battery

Realme Narzo 30A runs on Android 10 OS with custom Realme UI on top of it. The performance of the phone is handled by a MediaTek Helio G85 octa-core processor integrated with a Mali-G52 GPU and 3GB of RAM. You can expect to have a lag-free experience on basic operations like calling, messaging, scrolling, etc. For unlocking the phone, you get a rear-mounted fingerprint sensor on Narzo 30A.

The phone is backed by a big 6,000mAh Li-Po battery. The battery capacity is big and also it supports fast charging that saves buyers' time.

Realme Narzo 30A Storage and Connectivity

Realme Narzo 30A comes with 32GB of internal storage. You can also expand the storage up to 256GB using a micro SD card.

The Helio G85 and 600mAh battery are great integrations

in that case the Realme Narzo 30A is bound to be great for heavy games like COD and Fortnite, right?

Realme chose good features for a phone in this budget segment. Mediatek Helio G85 with 6000mAh battery ensures good performance without any lag

What it lacks in the camera dept, it makes up for it with its huge battery and the mediatek helio chipset which is really good for gaming

The battery, the display, the Helio G85 chipset and the audio quality of this phone is really good.