Realme 7 Pro price in India starts from ₹19,999. It is available at lowest price on Flipkart in India as on Feb 05, 2023. Take a look at Realme 7 Pro detailed specifications and features.

available at 2 stores →
Cost too much? Set an Alert for a price drop.
Realme 7 Pro price in India is ₹19,999. You can buy Realme 7 Pro online on Flipkart at lowest price. Realme 7 Pro was last updated on February 5, 2023

Realme 7 Pro is a mid-range level smartphone that comes with cool specifications onboard. The main highlight of Realme 7 Pro is a 65W super dart charge that fills the battery 0-100% in just 34minutes, also it is said to be India’s fastest charging phone, claims the brand Realme. Adding to the specification, the phone brings a 6.4-inch super AMOLED display with a punch-hole notch. For the camera performance, Realme 7 Pro sports Sony IMX682 64MP quad-rear shooters and a 32MP in-display selfie camera. Under the hood, the phone houses an 8nm Snapdragon 720G processor coupled with 6GB of RAM and 128GB of inbuilt storage. Realme 7 Pro is backed by a 4,500mAh battery and has dual stereo speakers with Dolby Atmos. Let’s read more about Realme 7 Pro in detail and see what else the phone hides.

Realme 7 Pro brings a 6.4-inch color AMOLED display with a punch-hole. This multitouch panel has a FullHD resolution of 1080x2400pixels with a pixel density of 409PPI. The visuals from the display are expected to sharp and clear. Biometrics features included are, an in-display fingerprint sensor and face unlock. The screen has a reasonable size for watching and other counterparts, also it has an aspect ratio of 20:9 with a screen to body ratio of 90%.

Realme 7 Pro is driven by an 8nm process Snapdragon720G SoC with 2.3GHz octa-core processors. The phone runs on Realme UI based on the Android 10 operating system. For handling the heavy apps and games, the phone depends on 6GB of RAM paired with Adreno620 GPU. This configuration is likely to draw the attention of gamers. The phone has user-friendly sensors like Light Sensor, Proximity Sensor, Magnetic Induction Sensor, Gyro-meter, Acceleration.

Realme 7 Pro is backed by a 4,500mAh battery under the hood and supports a 65W super dart charging support out of the box. The battery attains 42% in 10mn of charge, and takes 0-100% in just 34minutes, claims Realme. Based on the battery size, a full day of power backup on average usage is expected

Realme has really proved to be a very good brand in very short time of this brand being launched in 2018. This phone looks awesome with superb specs, especially 65 W fast charging battery, nice camera and Super Amoled screen which is not available in most of the phones sub 20000 from other brands except Samsung. I would have given it full 10 rating had the processor been more than SD 720, say new SD 732 processor. But overall nice phone

How much is battery capacity of Realme 7 Pro?

The battery capacity of Realme 7 Pro is 4500mAh.

What is display type of Realme 7 Pro?

What is price of Realme 7 Pro ?

When Realme 7 Pro is launching?

India has been emerging as one of the major markets for leading tech brands like Samsung, Xiaomi, Realme, Poco, Motorola, and more. In 2023, many of these top brands are going offline in India, and those whic…

2023 is here and the first month of every new year is filled with festivities like Lohri, Makar Sankranti, Pongal, Republic Day, and more. Festivities mean holidays and holidays always mean that you need some… 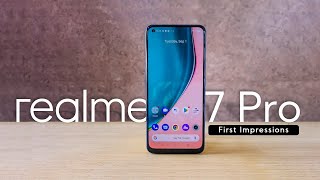