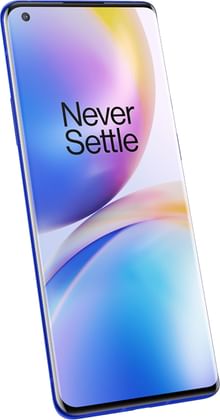 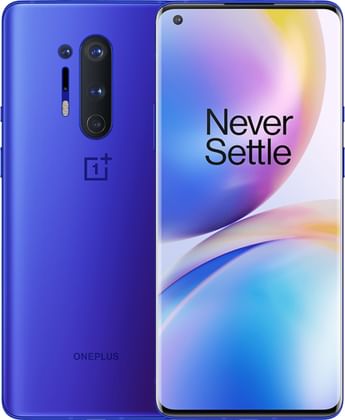 OnePlus 8 Pro price in India starts from ₹48,999. It was available at lowest price on Croma in India as on Aug 13, 2022. Take a look at OnePlus 8 Pro detailed specifications and features.

Read More
This Mobile Phone is Out of Stock.
Set an Alert to know when it comes back in stock.
₹48,999
Search

OnePlus 8 Pro is a powerful phone that sports a Quad HD+ display with a 120Hz refresh rate, premium Snapdragon 865 chipset, and has UFS3.0 storage. This is amongst the 8-series phones from OnePlus that is set to compete with flagships. Let's read more about it in detail and see how it performs against the existing competition.

OnePlus 8 Pro is driven by a premium Snapdragon 865 chipset with 8-performance cores. The phone runs on Android 10-based Oxygen OS10.0. Adreno 650 GPU. According to Qualcomm, this chipset offers desktop-level gaming which could be a huge advantage for gamers who prefer intense gaming. Also, the phone has all useful sensors like Compass, Accelerometer, Gyroscope, Light Sensor, and Proximity.

OnePlus 8 Pro sports a 48MP sensor which is followed by a 48MP ultra-wide sensor with 3X optical zoom, 8MP telephoto, and a 5MP depth sensor which determines the depth info for portrait shots. As far as the recording is concerned, the rear camera can shoot UHD 4K videos @30fps which could benefit online video creators. For selfies and video calls, a 16MP shooter lies in the punch hole which can also record FHD 1080p videos @30fps. Features like Face detection, Touch to focus, Autofocus, and digital zoom are also present.

OnePlus 8 Pro comes with a 6.78-inch fluid AMOLED capacitive screen with a protective layer of Gorilla Glass 6. It has a Quad HD+(1440x3168px)display with 513ppi which results in sharp and clear visuals. Also, the punch-hole display refreshes at 120Hz which could be a plus point for intense gameplay. For biometrics, it features an in-display fingerprint sensor and face unlock.

The phone has a glossy finish on the back panel with a protective layer of Gorilla Glass 5 while the aluminum side frames give it a premium look. The phone has a reasonable height (165.3) which makes it easier to fit in the pocket and OnePlus has tried to keep 8.8mm of thickness to give it a slim look. The phone is available in two different colors Silver and Blue color.

OnePlus 8 Pro is backed by a 4510mAh battery which comes with 30W fast wrap charge support. Judging by the size, the battery should deliver a day of power back up under normal usage.

OnePlus 8 Pro has UFS3.0 storage which transfers data at 2x speed over UFS2.0. The internal storage of OnePlus 8 Pro is ample 128GB which sounds good enough to satisfy the storage needs of most people. The phone doesn’t have any extra card slot, though.

OnePlus 8 Pro is a flagship phone that features class-leading specifications. It has an IP68 rated body that assures of protection against dust and spills. OnePlus is popular for its flagship phones that appeal to tech enthusiasts. The new 8 Pro should serve the target audience rather well

Oneplus never fails to impress in terms of specs when it comes its smartphone by being one of the best in the flagship killing segment. Oneplus 8 pro will surely blow our minds away with an specatacular display and top of the notch camera setup. Oneplus 8 pro will give a tough competition to its competitors. Pros: 1. IP68 Water resistant 2. Great camera 3. Trendy Punch-hole selfie cam 4. A large battery with fast charging Cons: 1. A Little bulky 2. No expandable memory 3. Not so innovative design

We all known Oneplus for its title of flagship killer, but last year we see Oneplus launch a new segment of the phones which they called a true flagship. Well, they are not as popular as a regular Oneplus. So this year Oneplus ditches the fancy pop camera and back with a punch-hole camera design. It's a nice move as it significantly reduces the weight of the device and helps to add more battery in it. The device will be equipped with the latest hardware and multiple camera layouts, It will be nice to see how well they build quality of the device.

what is the battery capacity of Oneplus 8 Pro?

The battery capacity of oneplus 8 Pro comes with 4510 mAh, battery.

What is the expected price of Oneplus 8 Pro ?

When Oneplus 8 Pro is launching in India?