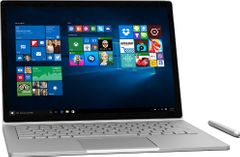 Microsoft Surface Book (6th Gen Ci5/ 8… is currently not available in any stores.
Who Viewed This Also Viewed ...

49
Expert Rating
Poor
Based on 1 Reviews
Positive:
0
Mixed:
0
Negative:
1
49
Smartprix
Microsoft Surface Book - An Enticing Laptop; Features and Specifications
Microsoft has dominated PC space for a very long time, and thus, it is indeed exciting to see its first laptop, which promises one of the best Windows 10 experience and comes with a thoroughly tempting design.

Microsoft’s Surface Book has a detachable screen which can also flip 360 degrees, supports pen-input (pen is bundled with the device) and has powerful internal hardware at its core (Microsoft claims that the top model is faster than iPad Pro).

Microsoft gets full marks for the design and built. The Surface Book is as premium as it gets, and at the same time, luxuriously unique. The keyboard keys have good travel, but only after the full review can be determine their exact productivity.

Microsoft claims 12 hours of battery backup, which is very much believable considering the fact that there are 2 batteries inside (one in the display unit and one in the keyboard dock). Even If Microsoft’s demonstration at the launch event is half true, you won’t have any performance issues with the surface book.

The Surface Book Indian price is yet not available but we expect lowest price of Surface Book to be around 98,999 INR in India. One it officially arrives in India, you can refer back to compare prices and buy Surface Book Online for the lowest price

Write a Review
90
User Rating
Very Good
Based on 1 Reviews
Positive:
1
Mixed:
0
Negative:
0
90
Aakash Singh
Incredible Microsoft
The silver Microsoft 13.5" Surface Book Multi-Touch 2-in-1 Notebook is a high-performance laptop/tablet hybrid with power and versatility. The Surface Book packs an Intel 6th gen (Skylake) dual-core processor into a magnesium casing with a silver finish. Use the tactile keyboard and touchpad to stay productive. You can also detach the screen from the dock and use the Surface Book as a tablet. The included Surface Pen provides added precision thanks to its 1024 levels of pressure sensitivity. With a 13.5" PixelSense display, the Surface Book features a 3000 x 2000 screen resolution (267 ppi) and a 3:2 aspect ratio. The display is also a 10-point touch support so you can take full advantage of the multi-touch gestures incorporated into Windows 10 Pro. If you want to output video to an external display, you can use the mini DisplayPort. The system is powered by a dual-core 6th generation (Skylake) 2.4 GHz Intel Core i5-6300U processor with integrated Intel HD Graphics 520. It also has 8GB of RAM, a 128GB solid state drive, an SD media card slot, 802.11ac Wi-Fi, Bluetooth 4.0, a 5MP front-facing camera, an 8MP rear-facing camera with autofocus and 1080p HD video recording, and dual integrated microphones. There are also built-in front-facing stereo speakers with Dolby audio. Windows 10 Pro is the installed operating system.
0
0
Add Comment (0 total)
Write a Review
Discussions