Sony Xperia E4 price in India starts from ₹9,549. It was launched on March 21, 2015. It was available at lowest price on ShopClues in India as on Jan 21, 2022. Take a look at Sony Xperia E4 detailed specifications and features. 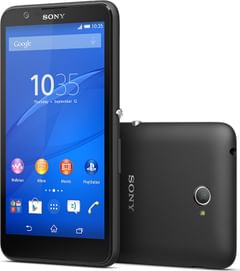 77
Expert Rating
Good
Based on 1 Reviews
Positive:
1
Mixed:
0
Negative:
0
77
Smartprix
Sony Xperia E4 Review and Specifications: A Smartphone With Fast Performance
After a long time Sony is going to launch its upcoming model Sony Xperia E4 which is LTE enabled, by April 2015. Sony has made a commitment about this smartphone that it’s a long lasting smartphone that takes its user straight to what they actually want. Read below for Sony Xperia E4 specifications.

This upcoming model of Sony comes with an Android 4.4.4 KitKat, processor of this smartphone is 1.3 GHz quad-core MediaTek processor coupled with 1 GB RAM & the inbuilt storage of this smartphone is 8 GB that is expandable up to 32 GB by micro SD card. Sony Xperia E4 battery is 2300 mAH which is not user replaceable. It also has Wi-Fi, Bluetooth v4.1 and A-GPS.

Sony Xperia E4 camera is 5 MP with a resolution of 2592 х 1944 pixels. It has auto recognition, 4x digital zoom, geo-tagging with 1080p HD video recording and its front facing camera is 2 MP which is good enough for selfie. The smartphone has 3.5 mm audio jack, USB high speed synchronization via exchange facility. Display is 5.0 inch with a resolution of 540x960 pixels with scratch-resistant glass.

After detailed Sony Xperia E4 review, it seems that it is a good device for all those who want a good smartphone under 10,000 with multitasking ability and one of the most important feature of Sony Xperia E4 is that it supports 4G/LTE mobile data support. You can purchase Sony Xperia E4 online on various e-commerce sites when the phone is available to buy.
Write a Review
Discussions
Related Products
Related Searches
Compared With
Related Deals
Related News
Report
Search The Product To Add