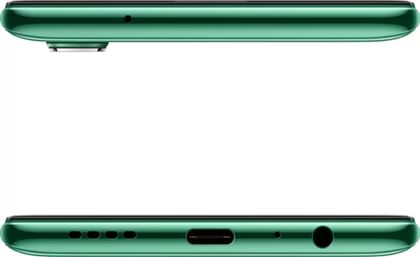 Realme X2 price in India starts from ₹17,999. It was available at lowest price on Flipkart in India as on Aug 10, 2022. Take a look at Realme X2 detailed specifications and features.

Read More
This Mobile Phone is Out of Stock.
Set an Alert to know when it comes back in stock.
₹17,999
Search

Realme X2 is a powerhouse midrange smartphone equipped with an 8nm processed Snapdragon 730G SoC, which is targeted at gamers. The phone also offers Samsung's 64MP GW1 sensor with Tetracell and 3D HDR technologies for better camera performance. Realme X2 sports its latest In-display fingerprint sensor and can be unlocked in 0.36s, claims Realme. This Realme X2 is clearly targeted to Xiaomi's Redmi Note 8 Pro. Let's jump into its details and see if this Realme X2 can beat Redmi Note 8 Pro.

Realme X2 is driven by an 8nm Processed Snapdragon 730G SoC. The chipset has 8-performing cores with a clock speed of 2.2GHz. Realme aims at gamers with this midrange Snapdragon 730G chipset which offers 35% improved GPU performance. The phone has 4GB of RAM, and for handling the heavy load of applications and games Adreno 618 GPU which offers 25% improved performance. The phone has user-friendly sensors like Light Sensor, Proximity Sensor, Magnetic Induction Sensor, Gyro-meter, Acceleration.

Realme X2 sports a set of 64MP AI quad cameras. Realme has used Samsung GW1 sensor in Realme X2. The camera sensor is powered by Tetracell and 3D HDR technologies which results in capturing better low-light pictures. The setup is followed by a 64MP primary sensor, an 8MP 119°ultra-wide-angle lens and two 2MP's of macro and a depth sensor with autofocus. Realme X2 has upgraded Super Nightscape 2.0 for improved night shots. For selfies, a 32MP camera lies in the water drop notch. As far as the recording is concerned, you can record UHD 4K videos @30fps.

Realme X2 has a glossy finish with plastic framing on the sides with a premium finish. The phone measures 158.7mm in height and have 8.6mm of thickness. Also, the phone has a light body with 182grams of weight. Realme X2 comes in three different colors Pearl Blue, White and Green.

Realme X2 includes a 6.4-inch display with a water drop notch. The phone is fitted with a color super AMOLED screen with multitouch. This HD+ panel has a resolution of 1080x2340pixels with a pixel density of 402PPI. The visuals may look sharp based on the configuration. The aspect ratio of the phone is 19.5:9 with a screen to body ratio of 91%. Realme X2 has protective layer of Gorilla glass 5.

Realme X2 has a 4000mAh Li-Po battery under the hood. Based on its size full day of power backup is expected on average usage. The battery may attain 65% charge in just 30minutes. Realme X2 is backed by 30W Vooc flash charge 4.0.

Realme X2 has 64GB of UFS2.1 storage. Also, the phone has an extra card slot which expands the storage upto 256GB.

Realme X2 is a powerful midrange smartphone equipped with Snapdragon 730G chipset with 8GB of RAM. Also, the phone has 64MP quad cameras which offers quality pictures. This Realme X2 is the answer to Xiaomi Redmi Note 8 Pro.

#ExpertReview
By Smartprix • 2 years ago
The Realme X2 gets most things right and apart from the overdone rant on color OS, there isn’t much to complain about. The X2 delivers excellent gaming hardware, we could tweak and customize the AMOLED screen to our liking, camera performance is at par with what we usually expect in this budget, and that battery pack and fast charging are phenomenal. On the downside, the phone feels very generic on the outside and we blame unimaginative V-shaped notch for the repetitive look. Now that we are entering 2020, perhaps a pop-up module or a circular notch would have spiced things up for the better.
Read Full Review →
VIEW ALL EXPERT REVIEWS (1) →

When mobile will launch

The expected launch date is Dec 2019.

Hello Check This Website for Gadget Update and Reviews

what is touch response rate?

I want buy it?