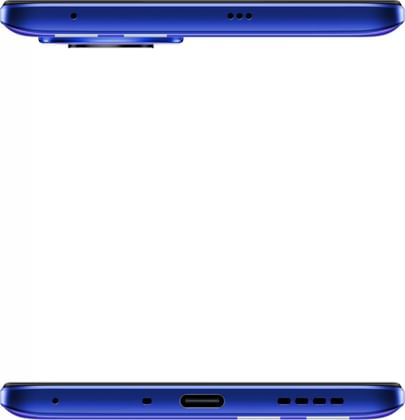 Realme GT Neo 3 5G in India comes with impressive features & specs such as Dimensity 8100 SoC integrated with 8GB RAM & 128GB UFS 3.1 storage, a 50MP triple-rear and a 16MP selfie camera, Doly Atmos dual speakers, an in-display fingerprint scanner, and the phone is backed by a 5,000mAh battery supported by an 80W fast charger. Read here the full details of the phone and compare it with other mid-rangers in the market.

Realme GT Neo 3 5G has a 6.7-inch AMOLED touchscreen with fewer bezels and a punch-hole notch. The panel has more than 94% of the screen-to-body ratio alongside a 120Hz of refresh rate as well as a Full HD+ resolution of 1080x2412px and 394ppi. On top of that, the display is protected with a layer of Gorilla Glass 5 for extra durability.

The smartphone brings a triple-rear camera setup mounted on a tiny rectangular bump. It has a 50MP main camera followed by an 8MP ultrawide camera and a 2MP macro camera. Also, it includes features like Night mode, Panorama, AI beauty, pro-mode, slo-mo, timelapse, street mode, etc for better photography. Besides, the phone has a 16MP punch-hole camera for selfies and video calls.

Realme GT Neo 3 5G smartphone is powered by a MediaTek Dimensity 8100 octa-core processor embedded on a 5nm chipset. As for multitasking and gaming, the SoC is paired with 8GB LPDDR 5 RAM and an Arm Mali G610 GPU on board. And, it runs on the Android v12-based Realme UI 3.0 skin on top.

The smartphone packs a big 5,000mAh Li-Po battery under the hood. Also, it is supported by a fast 80W charger that delivers 0-100% of charge in just 32-minutes, Realme claims. Considering the details, it might draw the attention of heavy users and gamers who spend more time on screen.

Realme GT Neo 3 5G comes with 128GB of internal space which is decent for keeping demanding apps, games, and other files. Also, it has built-in UFS 3.1 storage that boosts data transfer speed and apps/games’ launch time. However, it doesn’t have an SD card slot which limits its storage capacity.

The smartphone’s connectivity options include 4G, VoLTE with dual-standby, 5G (in-selected markets), Wi-Fi, Bluetooth 5.3 for faster pairing, NFC, and a USB Type-C port. Besides, it has GPS with A-GPS, Beidou, GLONASS, Galileo, and QZSS for online location tracking.

Write a Review
4.2
786 ratings
Be the first to write a review
WRITE A REVIEW →

What is the battery capacity of Realme GT Neo 3 5G?

What would be the price of Realme GT Neo 3 5G?