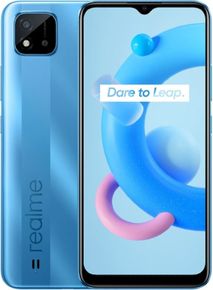 Realme C20 comes in an affordable smartphone with a big 5,000mAh battery with 10W fast charge support. It runs on Android 10-based Realme UI on top. The smartphone has a 6.5-inch HD+ notch display with a 5MP camera. The rear side of the Realme C20 has a single 8MP rear camera with an LED flash. Under the hood, the smartphone bears an Helio G35 SoC paired with 2GB of RAM and 32GB of inbuilt storage. Let’s read more about Realme C20 and compare it with the other budget smartphones.

Realme C20 smartphone includes a 6.5-inch HD+ resolution display with 720x1600px. This is an IPS LCD display with a pixel density of 270ppi. With the given details, the panel is likely to show detailed visuals. The display has thick bezels around with a nearly 90% of screen to body ratio. However, you get a decent screen size to do daily tasks on the phone.

Realme C20 sports a single 8MP rear camera backed by an LED flash.  The primary 8MP wide camera comes with autofocus that can offer basic photography. For selfie lovers, the smartphone has a 5MP notch camera that also supports the face unlock. As far as the recording is concerned, you can record FHD 1080p videos @30fps using the main rear camera.

Realme C20 runs Android 10 based on RealmeUI on top. Under the hood, the smartphone has an entry-level MediaTek Helio G35 octa-core processor that ticks at a clock speed of 2.3GHz. The SoC is paired with 2GB of RAM for handling the background performance while PowerVR GE8320 GPU renders graphical needs for the apps and games. It is expected to handle daily tasks and other useful works without much problem on the phone.

Realme C20 smartphone comes with a big 5,000mAh battery with a 10W fast charge support. It is expected to deliver a full day of battery life under normal usage. Realme C20 can be recommended for heavy users who prefer big battery phones at budget.

Realme C20 smartphone has 32GB of inbuilt storage support for important files. Also, it has an extra storage slot that can be used to store apps, games, videos, photos, music, documents, etc.

Realme C20 connectivity options include 3G, 4G, and VoLTE feature that enables HD clear voice calls on supported networks. It has WiFi, Bluetooth 5.1 that offers fast pairing and stable connection, and a MicroUSB v2.0  port. For real-time navigation, it features GPS with an A-GPS, GLONASS, and BDS constellation.