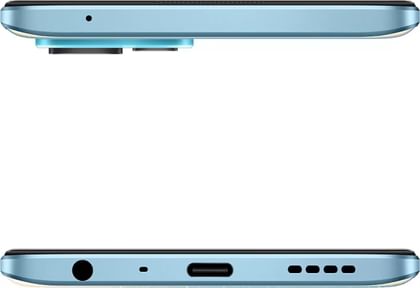 Realme 9 Pro 5G price in India starts from ₹18,999. It is available at lowest price on Croma in India as on Dec 04, 2022. Take a look at Realme 9 Pro 5G detailed specifications and features.

Realme 9 Pro 5G comes as a successor to the Realme 8 Pro smartphone. In terms of the specs & features, it offers a 6.6-inch FHD+ 120Hz screen, a 64MP triple-rear & a 16MP front camera, a side fingerprint scanner, a big 5,000mAh battery supported by a 33W charger, and the phone is powered by a Snapdragon 695 chipset with 6GB+128GB internal storage. Let’s dive into its details and see how the phone performs against its competitors.

Realme 9 Pro 5G is fitted with a 6.6-inch IPS LCD punch-hole display. The phone also has a 120Hz screen for better touch interaction and an FHD+ resolution with a pixel density of 400PPI improves its picture quality.

The smartphone brings a 64MP triple-rear camera setup with an LED flash. It has a primary camera with an aperture of f/1.7, an 8MP ultrawide sensor, and a 2MP macro camera for taking close-up shots. Besides, the phone comes along with a 16MP front camera for assisting selfies and video chats.

Realme 9 Pro 5G runs on the Android v12 operating system with Realme UI 3.0 on top. The smartphone is driven by a Snapdragon 695 octa-core processor embedded on a 6nm chipset. On top of that, it is paired with 6GB RAM and an Adreno 619 GPU for a performance boost. And, the phone features a side-mounted fingerprint scanner and face unlock for security unlocks.

The smartphone retains a big 5,000mAh Li-Po battery under the hood. Also, the phone is backed by a fast 33W charger that offers quick charging and saves time as well. Considering the battery capacity, it might draw the attention of heavy users and gamers who spend more time on screen.

Realme 9 Pro 5G comes with 128GB of built-in UFS 2.2 storage that boosts its performance and transferring speed. Also, it has a Hybrid card slot that can be used to keep extra files.

The smartphone has 4G, 5G (in-selected markets), VoLTE with dual standby, Wi-Fi, Bluetooth 5.1, a 3.5mm audio jack, and a USB Type-C port in terms of connectivity preferences. Besides, live location tracing constellations such as GPS with A-GPS, Beidou, and GLONASS are present.

FM RADIO IS MISSING SO SAD

What would be the price of Realme 9 Pro 5G?

What would be the battery capacity of Realme 9 Pro 5G?

When Realme 9 Pro 5G is launching?