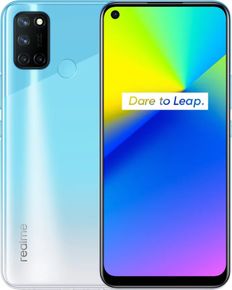 Realme 7 Pro SE is a youth-centric mid-range lineup smartphone that comes with cool features onboard. Realme 7 Pro SE runs on the Android 10 operating system and employs 8GB of RAM and 128GB of UFS2.1 storage. Adding more, the phone brings a 6.5-inch super IPS LCD display with a punch-hole notch and a rear-mounted fingerprint sensor for security unlocks. Let’s read more about Realme 7 Pro SE and you decide if this phone is worth buying or not?

Realme 7 Pro SE includes a 6.5 color super IPS LCD multitouch display. The panel has an HD+ resolution of 720x1600px that amounts to 270PPI. The display has a 90Hz of refresh rate that makes graphics smooth for better gaming and scrolling experience. The aspect ratio of the phone is 20:9 which is a reasonable screen size to counter daily tasks. Also, the display has minimum bezels around with a punch hole notch at the top left corner of the display.

Realme 7 Pro SE sports a 64MP quad rear cameras on a rectangular bump with an LED flash. The cameras are aligned in L-shaped. The primary 64MP camera is followed by an 8MP ultra-wide camera that can be used to shot wider pictures on the frame, a 2MP macro camera for capturing macro images, and the last 2MP depth sensor with autofocus completes the setup. You may capture decent images and portrait shots using the varieties of cameras. For selfies and video calls, there’s a 16MP camera inside the punch hole notch. As far as the recording is concerned, you may capture FHD 1080p videos @30fps.

Realme 7 Pro SE runs on the Android 10 operating system out of the box. The phone gets assisted from an 11nm processed Snapdragon662 chipset with octa-core processors. The chipset may handle average gaming performance. For better multitasking, the phone employs a massive 8GB of RAM, while Adreno 610 GPU renders graphical inputs for demanding apps and games. User-friendly sensors like Light sensor, Proximity sensor, Accelerometer, Gyroscope, and Compass are available for better user experience.

Realme 7 Pro SE is backed by a big 5,000mAh battery underneath. Based on the battery size, a full day of power back up is expected. Also, the phone comes with a fast 18W charger out of the box. Buyers may benefit from the fast charger to quickly charge the big battery.

Realme 7 Pro SE has an ample 128GB of UFS2.1 storage that can be used to transfer/receive files faster than normal storage. You may store apps and games in the internal storage while its external card slot that supports 256GB of storage can be used for storing music, videos, photos, documents, movies, etc.