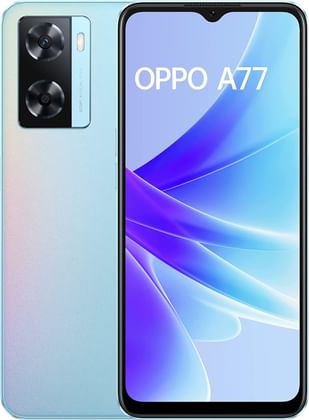 OPPO A77 price in India starts from ₹15,499. It is available at lowest price on Amazon in India as on Jan 30, 2023. Take a look at OPPO A77 detailed specifications and features.

Oppo A77 4G is an affordable Android smartphone from the brand’s A-series segment. The highlighted offerings of the phone are a big 5000mAh battery, stereo speakers with ultra volume mode, 50MP AI dual-rear camera, a 6.56-inches waterdrop notch display, 33W fast charging via a Type-C port, etc. Below are the full details of the smartphone that one must read before making any purchase decision.

Oppo A77 4G Display and Camera

Oppo A77 4G smartphone is fitted with a 6.56-inches IPS water drop notch touch screen. The panel has thin bezels and an aspect ratio of 20:9. As for viewing, it offers an HD+ resolution of 720x1600px and a pixel density of 267ppi. Also, the phone is IPX5 rated making it dust resistant.

The smartphone carries a 50MP dual AI-rear camera with an LED flash. It has a 50MP primary camera followed by a 2MP camera with autofocus. On the front side, it sports an 8MP notch camera for assisting selfies and video chats. Besides, the main and the front camera is capable of recording FHD 1080p videos.

Oppo A77 4G Performance and Battery

Oppo A77 4G smartphone is powered by a MediaTek Helio G35 octa-core processor paired with 4GB built-in RAM and a PowerVR GE8320 GPU. On top of that, the phone has up to 4GB of virtual RAM to enhance the multitasking experience. As for the software, it runs on the Android v12 operating system with Color OS 12.1 skin on top.

A big 5000mAh Li-Po battery blows life into the smartphone. Considering the size of the battery, a full day of power backup is expected on normal usage. Also, the phone is backed by a fast 33W charger that promises to charge the battery in less time. A reminder that it lacks a reverse charging feature.

Oppo A77 4G Storage and Connectivity

Oppo A77 4G smartphone comes with 64GB of internal storage capacity that can be used for keeping demanding apps and games. Also, it supports a micro SD card that makes more room for extra files.

As for the connectivity options, the phone has 4G, VoLTE with dual standby, Wi-Fi, Bluetooth 5.2 with up to 10-meters of wireless range, a USB Type-C port, and a 3.5mm headphone jack. Besides, Google’s GPS with A-GPS is present for online location tracking.

Oppo Reno 8 recently made its debut in the Indian market as well as the global market. Currently, it is being said that Oppo is already working on the Oppo Reno 9 series smartphones. Popular tipster Digital C…

A host of new A-Series smartphones from Oppo are now available for purchase in Indian stores. A retailer Manish Telecom shared that the Oppo A17 and the Oppo A77s can now be bought in India via offline retail…