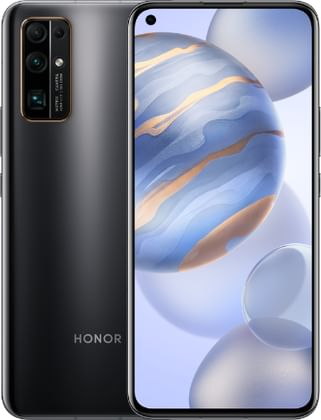 Read More
This is an Upcoming Mobile Phone. Honor 30 is expected to launch soon.
Set an Alert to know when it launches.
₹31,999
Search

Honor 30 displays a 40MP quad-rear snappers, is powered by Kirin 985 chipset coupled with 6GB of RAM and is backed by a 4000mAh battery. Huawei backed Honor brand is improving its configurations to compete against the existing mid-range giants. Let’s see read more about this Honor phone and see how it performs without any Google play service.

Honor 30 displays 40MP quad-rear shooters powered by Sony IMX 686 sensor. The setup includes a 40MP wide angle lens which is followed by two 8MP’s telephoto sensor, and ultra-wide sensor, also a 2MP depth sensor is there with autofocus. This Sony’s IMX 686 sensor can results in class-leading photography which gives it a plus point in the camera department. For recording, the Honor 30 records 4K UHD videos @30fps which is decent for recording. As far as the selfies are concerned, the punch hole notch houses a 32MP wide angle shooters which may result in fine group selfies. Also you it can record FHD 1080p videos @30fps.

Honor 30 is driven by a Kirin 985 chipset with 8-cores running. The phone has Android 10 as its base operating system. For handling the graphics demands and background activities, it houses a Mali-G77 GPU coupled with 6GB of RAM. Judging by the configuration, gaming and demanding applications should perform smoothly. Useful sensors like Compass, Accelerometer, Gyroscope, and Proximity are present.

Honor 30 includes a 6.5-inch color AMOLED display with a multitouch panel. The punch-hole display has FHD+(1080 X 2400) resolution which amounts to 405PPI. This pixel density can results in sharper visuals on this 20:9 aspect ratio panel. Also, the display is HDR10 compliant which results in better color visuals.

Honor 30 has 128GB of internal storage capacity which is ample for storing from apps, games, to music, pictures etc. Also, it has an extra card slot which expands the storage up to 256GB.

Honor 30 is backed by 4000mAh battery and juiced up from a 40W fast charger. Based on the size, the battery should deliver at least a day of power usage on normal usage.

Honor 30 is an mid-range offering and has appealing features. Sony’s 40MP IMX 686 sensor can be appealing to the camera lovers. But without any support of Google play service may disappoint many buyers.

Write a Review
4.6
76 ratings
Be the first to write a review
WRITE A REVIEW →

Approx launching date for Honor 30 series in India? I'm pretty sure it will after this pandemic but when Which month? So exited for this honor 30 series (🔥Honor 30 🔥). Pls reply to this question 🙏.

Motorola Edge 30 Fusion just arrived while its competitors Realme GT Neo 3T and OnePlus 10T have been around for a few months now. Comparing each one of them, let’s see which one takes the lead in various dep…