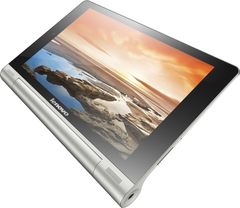 Write a Review
85
User Rating
Very Good
Based on 12 Reviews
Positive:
10
Mixed:
1
Negative:
1
100
Aman Agarwal
Best tablet ever
This tablet has everything a good tablet needs...... Massive battery life, awesome sound, large screen, etc.... Only the specs aren't as good as nexus 7 but playing GTA San Andreas without any problem proves that the specs are enough..... 4 months of buy, heavy use in business work and high quality gaming..... Still no problem..... All Microsoft office apps also work in this tab and u can connect it to a pen drive also with otg cable.....
0
0
Add Comment (0 total)
100
Yashwardhan from  Flipkart
Small package......gigantic surprise !!!!!
I have had this tab for quite a few days back and here is my unbiased review of the same : The other contenders were :Sony Experia Z tablet,Samsung Galaxy Tab,iPad and iPad Mini. . Pitted against it`s rivals,the figures are as follows : Cost :A fantastic tab if you are on a budget and also want something good (Way better than the other contenders in many aspects).........(9.5/10) Looks :Fantastic looks with a metallic finish (No buttons on the front panel give it a very sharp,smooth and professional look)........(9/10) Screen :Looks good,crisp display and also has that "rich" look.Also has a power management app.........(8/10) Performance :Though it lacks a high end processor,but still manages to perform smoothly,handling multiple tasks at the same time..........(7/10) Battery :One word-Awesome !!! The others don`t even come close.........(9.5/10) Storage and interface :Massive expandable memory (64GB) and OTG Cable interface make work a whole lot easier (Just have an anti-virus installed)..........(9/10) Camera :Though the camera is of average quality,it can still produce some very nice pictures........(7.5/10) Multimedia features :The kick stand feature is not only unique but also practical and helpful (Specially in viewing documents or watching movies)............(8/10) Audio and video :The stock speakers are not so loud but still have a decent sound quality with DOLBY app.Sounds awesome on headphones,earphones or Bluetooth speakers.Also supports almost all video formats unlike it`s contenders (Great for movie lovers)..........(8/10) Connectivity :Wi-Fi,bluetooth and OTG cable allow you to connect to almost anything...........(9/10) Troubleshooting :Some of the users complained about stuck sim cards.Remedy for the same :Take your micro sim and pick out a spot that has the plastic end.Take a pin of the thinnest quality and using a gas torch heat it,make a fine hole and pass a fine thread through it.So if your sim gets stuck,you can just press it and simply pull it out like it was any other tab or phone (Just take extreme caution while making the hole). .read more →
0
0
Add Comment (0 total)
40
Vinod from  Flipkart
Lenovo Yoga 8 B6000 Tablet
Battery life is good but I faced a problem with the micro sim card, it is stuck in the slot & not working nor is it coming out. Tried to search for authorized service centres on the Lenovo site, only to get a error page. Reported this problem to customer support & feedback regarding the site for which I have till date not received any reply from them.read more →
0
0
Add Comment (0 total)
100
Aritra Das from  Flipkart
Great product at decent price
I wanted a minimum 8 inch tab with good resolution for mostly web browsing, watching movies, and with call+3G facility. I had initially shortlisted the Samsung Galaxy Tab3 T311, which is undoubtedly a great device, I have used my friend's tab3 for a couple of days and found it awesome. However, the Tab3 is priced at over 24k, and I found almost same specs for this lenovo yoga8. The samsung has a bit of more ram, a slightly better processor and perhaps a slightly better android interface. I got the lenovo within 15k, and I would say the differences are minimal considering the price advantage.read more →
0
0
Add Comment (0 total)
80
Srinivasan Gnanapiran from  Flipkart
Worth buying this unique "stand" out product
I had ordered this a month ago and had been using since then. I don't want to comment more about flipkart delivery since it has been praise worthy like other mentioned. Display - 8 inch, feels good to watch movies, youtube, read pdf or browse web. Especially with the unique stand behind, you never wanted to hold it hand for a long time. Sound - the 2 front dolby speakers delivers absolute clear sound when in speaker/ headset. You don't get that quality dolby sounds in any other device. Performance - I 'm not a game addict and use them mostly to download torrent movies, youtube and read PDFs.read more →
0
0
Add Comment (0 total)
Show More
Write a Review
Discussions
Related Products
Related Searches
Compared With
Related Deals
Related News
Report
Search The Product To Add