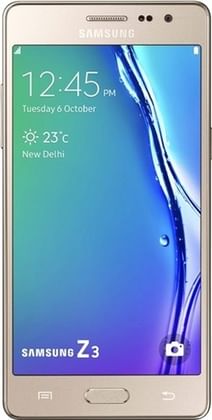 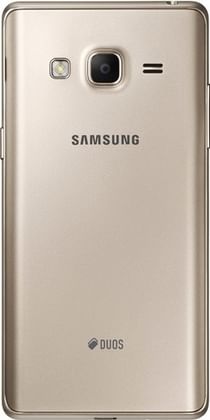 Samsung Tizen Z3 price in India starts from ₹4,990. It was available at lowest price on Amazon in India as on Oct 04, 2022. Take a look at Samsung Tizen Z3 detailed specifications and features.

Read More
This Mobile Phone is Out of Stock.
Set an Alert to know when it comes back in stock.
₹4,990
Search

#ExpertReview
By Smartprix • 6 years ago
Samsung still believes in its Tizen OS, which it is prepping up to play a big role in Internet of Things (IoT) devices. The Samsung Z1, being an entry level phone with Samsung branding sold very well, and now Samsung Z3 will continue its legacy. At the launch, the lowest price of Samsung Z3 in India is 8,499 INR, but there are good chances of price being slashed further. The Samsung Z3 comes with a 5-inch (1280 × 720 pixels) HD Super AMOLED display. Samsung proved with Galaxy J5 and J7 that it can make decent AMOLED panels, even on a budget and we don’t expect Z3 to disappoint in this regards. It is also the cheapest phone to offer an AMOLED display in India for now. The processor employed is 1.3 GHz quad-core Spreadtrum processor, aided with 1GB RAM and 8GB internal memory. If it were an Android phone we would have written off the chipset based on our prior experience, but we are yet to see how well Tizen OS 2.4 is optimized. The phone also includes decent camera for the budget. Imaging hardware includes 8MP rear camera with LED Flash, f/2.2 aperture lens paired with 5MP front-facing camera with 120-degree wide angle selfie mode and f/2.2 aperture lens. A 2600 mAh power unit housed inside looks above average too. If Samsung wants to increase share of Tizen running phones, it is mandatory that it provides great experience at budget price. On paper, Samsung Z3 seems like a good option for basic users who value Samsung branding. Samsung Z3 Snapdeal Price is 8,490 INR. For now you can only buy Samsung Z3 online in India. Samsung might later extend its availability to offline stores as well. Let's try and answer some frequently asked questions. Answer – The display is perhaps the best part of Samsung Z3. An AMOLED panel, benefiting from years of Samsung AMOLED expertise, for an under 10k price is definitely alluring. There are several software modes to tweak display colors and saturation. Answer – Like other budget phones, Samsung relies on Outdoor mode, which you have to manually select from notification shade, to enhance sunlight legibility. Answer – No, Auto Brightness is still missing. Answer- The Z3 screams Samsung from every angle. The handset is more rectangular than other Samsung budget use, but design ethos and material used (soft faux leather plastic back and chrome finished plastic side edges) are pretty much on the expected lines. It looks good for a budget phone with tier 1 branding. Question – Are Capacitive keys backlit? Answer – No, Capacitive keys are not backlit. Answer – It accepst 2 MicroSIM card slots. Call quality is average, signal strength was good. Answer – out of 8GB around 4.9 GB is available on first boot. You can move apps to SD card. Answer – Yes, USB OTG is supported. Answer – The Tizen OS is quite light and runs well even on modest budget hardware. There aren’t many apps to test how much beating it can take, but hardware is good enough for day to day usage and light gaming. Answer – We didn’t observe any heating issue on Z3 Answer- Out of 1GB, around 700MB RAM is free on first boot. Tizen is very efficient with RAM consumption. Answer – Camera is a below average affair. Camera performance was a hit or miss irrespective of the ambient lighting and it would be wise to not expect too much here. Answer – Battery backup is very good. You can easily go beyond one day with moderate to heavy usage. Answer – Yes, battery is user replaceable. Answer – Tizen is light and efficient, but lack of apps in the app store is a problem here. Developers aren’t very enthusiastic about developing apps for the nascent platform, and several apps which work on Z1 are yet to be optimized for Z3. Google apps and services are not supported on Samsung Z1. Answer – Loudspeaker loudness is average. Answer – you will get 1A charger, data cable, head phones and documentation bundled with the box. Samsung Z3 is a very basic phone meant for the most basic of users. Lack of Google services and apps might also be a deal-breaker for those already invested in Android ecosystem. The handset is targeting first time users switching from feature phones who need to engage only with basic usage.
Read Full Review →
VIEW ALL EXPERT REVIEWS (1) →

Using this phone from a year it is not having any type of hanging problem and heating problem have very powerful battery and nice processor also have good camera and also full hd screen.... 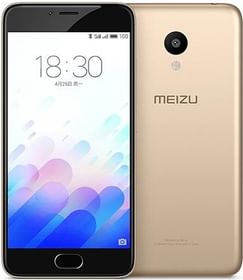