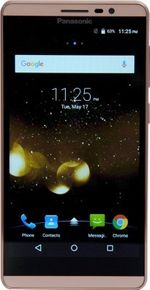 Panasonic Eluga I3 Price In India

68
Expert Rating
Average
Based on 1 Reviews
Positive:
0
Mixed:
1
Negative:
0
68
Smartprix
Panasonic Eluga l3 price in India, features and specification
Off late Panasonic has up the ante by introducing new smartphones under various price brackets. Following the same lead, Panasonic has announced new phone under Eluga series. The Eluga l3 features in the budget range smartphones under 10K in India. Here’s everything we know about Panasonic Eluga l3 including features, specification and price in India.

Biggest USP of Eluga l3 is that it supports all India specific 4G LTE bands and also has the capability to carry voice over LTE network (VoLTE). The Dual SIM phone has a textured back design and is available in Champagne Gold, Rose Gold, and Marine Blue colors option.

The Panasonic Eluga l3 enthralls on an unspecified quad-core processor clocked at 1.3GHz combined with 2GB of RAM. It comes equipped with a 5.5-inch IPS display with 720 x 1280 pixels resolution. The handset has 16GB of built-in storage which can be expanded up to 32GB via microSD card.