Read More
This is an Upcoming Mobile Phone. Motorola Moto E7 is expected to launch soon.
Set an Alert to know when it launches.
₹8,499
Search

Moto E7 is an affordable Android smartphone from the house of Motorola, under Lenovo's ownership.  Motorola Moto E7 packs a 4,000mAh Li-Ion battery and is fitted with a 6.5-inch HD+ notch display. An Helio G25 octa-core processor drives the phone with 2GB of RAM and 32GB of storage. On the optics side, it has a 48-MegaPixel dual-rear camera and a 5MP front camera. Let’s read more about Moto E7 in detail and see how it performs

Moto E7 smartphone brings a 48MP dual rear camera set up with an LED flash. The main 48MP camera is coupled with a 2MP Macro sensor with autofocus. The Macro camera can be used to capture micro-shots and the main camera can be used for basic photography. The phone has a 5MP selfie camera inside the notch. The camera app has features like Digital Zoom, Auto Flash, Face detection, Touch to focus for a better experience. As far as the recording is concerned, you can shoot FHD 1080p videos @30fps using the main rear camera.

Motorola Moto E7 is powered by an entry-level MediaTek Helio G25 chipset with octa-cores. The phone runs on the Android 10 operating system out of the box. It has 2GB of RAM to improve background tasks or multitasking performance. For graphic rendering, it has a PowerVR GE8320 GPU. User-friendly sensors included on the phone are an accelerometer, proximity, and light sensor.

Moto E7 is fitted with a color 6.5-inch IPS LCD display with a waterdrop notch. The screen has an HD+ resolution of 720x1600px with a pixel density of 269PPI. The display has slim bezels around with an aspect ratio of 20:9. The display has a fair size to treat your eyes. Also, with the given details, it is expected to show decent visuals.

Motorola E7 packs a 4,000mAh Li-ion battery underneath. Deciding upon the battery size, buyers may expect a day of power back on average usage on the phone. It comes with a proprietary charger out of the box.

Write a Review
4.4
105 ratings
Be the first to write a review
WRITE A REVIEW →

How much is battery capacity of Motorola Moto E7?

The battery capacity of Motorola Moto E7 is 4000mAh.

What would be the price of Motorola Moto E7?

The expected Indian price of Motorola Moto E7 is 8,499.

When Motorola Moto E7 is launching? 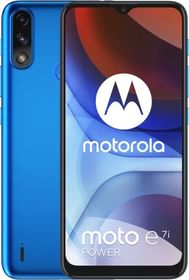