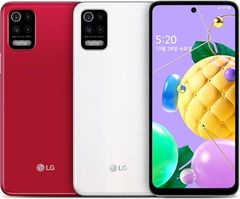 LG presents LG Q52 in a category of mid-range smartphones. The phone comes under the Q-series smartphones from LG. Under the hood, LG Q52 has a MediaTek Helio P35 chipset with 4GB of RAM and 64GB of base storage. On the optics side, the phone sports a rectangular camera bump that employs a 48MP quad camera setup and a 13MP front camera. LG Q52 smartphone comes in White and Red color options. Let’s read about the phone in detail and see what else it hides.

LG Q52 is fitted with a 6.6- inch IPS LCD multi touch display. The panel has a punch-hole with fewer bezels and thick notch at the bottom. This is an HD+panel(720x1600pixel) with a pixel density of 266PPI, this configuration may offer average sharpness. Also, the panel has an aspect ratio of 20:9.

LG Q52 has a rectangular camera bump that sports a 48MP quad rear cameras backed by Dual-LED flash. The main 48MP camera with an aperture f/1.8 is coupled with a 5MP ultra-wide camera that has 115˚ of a field view, and two 2MPs of a macro camera and a depth sensor with autofocus. You may expect decent photography from the cameras. Also, portrait, macro, and ultra-wide shots can be captured using the multiple cameras. For selfies and video calls, the phone has a 13MP camera. As far as the video recording is concerned, you may record FHD 1080p videos @30fps.

LG Q52 runs on the Android 10 operating system out of the box. The smartphone houses MediaTek Helio P35 octa-core processors embedded on a 12nm chipset. The phone has 4GB of RAM that assists in background tasks while PowerVR GE8320 GPU handles the graphical needs. Userfriendly sensors like Compass, Accelerometer, Proximity are all present on the phone.

LG Q52 packs a 4,000mAh Li-Po battery underneath. Judging upon the battery size, you may expect a full day power backup over normal usage on the phone. For charging, the smartphone comes with a proprietary charger out of the box.

LG Q52 comes with an inbuilt storage of 64GB for apps and games. Also, it has an extra-card slot that can be used using a micro-sd card. This makes more room for videos, music, photos, documents, and other files.

LG Q52 has the usual sets of connectivity options that include 3G, 4G, and VoLTE that enables HD voice calls and video calls on supported Jio networks, also, it has WiFi, Bluetooth5.0, and USB v3.1 with Type-C port. For real-time navigational support, it features GPS with A-GPS.