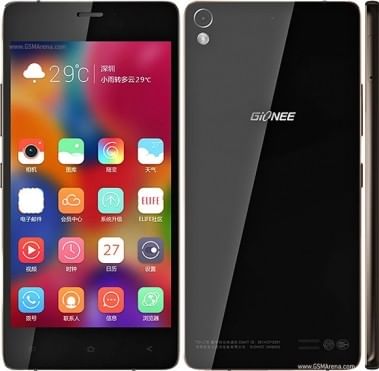 Gionee ELIFE S7 price in India starts from ₹6,999. It was available at lowest price on Amazon in India as on Jul 07, 2022. Take a look at Gionee ELIFE S7 detailed specifications and features.

#ExpertReview
By Smartprix • 6 years ago
Gionee Elife S7 is one of the slimmest phone available in the market. The Chinese manufacturer has been successful in shedding off bulges on the phone that too without compromising on its sturdiness. Manufacturer first showcased it at MWC Barcelona earlier this year and soon after it arrived at Indian shores. After a few price cuts, the lowest price of Gionee Elife S7 in India is 17K approx. The Gionee Elife S7 features a 5.2-inch Full HD AMOLED screen with 424 pixels per inch. It come with a super- slim body which is only 5mm thick around the waist. Under this slim exteriors rests a 1.7GHz octa-core processor coupled with 2GB of RAM. The phone is armed with a 13 megapixel shooter with autofocus and LED flash. A wide angle 8 megapixel selfie shooter is placed at the front. It runs on the Android v5.0 Lollipop OS with Amigo 3.0 OS skin overlaid on it. On the downside, this device comes with 16GB internal memory and doesn’t feature an expansion slot. Talking about other specification, the phone fulfill its power requirement from a 2,750mAh Li-ion battery that gives sizable talk time on 3G. Apart from 4G LTE support, the device offers 3G, Wi-Fi, GPS, USB port, Bluetooth and Wi-Fi as connectivity options. With its ultra slim body and powerful configuration, Gionee has got almost all the basis coverage apart from missing microSD card slot. Having said that Gionee has got a winner up its sleeves in Elfie S7. Buy Gionee Elife S7 at best price of 17,025 INR via Ebay.in.
Read Full Review →
VIEW ALL EXPERT REVIEWS (1) →

its waste of money and no warrenty on mobile,its all fake on warrenty the build quality is not good it can easily breakable i bought before 20 days but no response from care its too high cost for service its nearly 10000 for service charges for this soo plzz go for samsung,sony,htc,nokia