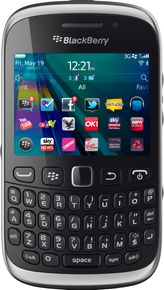 70
Expert Rating
Good
Based on 4 Reviews
Positive:
2
Mixed:
1
Negative:
0
NA
GSM Arena
BlackBerry Curve 9320 review: Coach class
It's been quite a while since we last reviewed a BlackBerry handset. Android and iOS have dominated the market for the past couple of years and it's hard to see where exactly a business-centric QWERTY device can fit in.

Whether or not BlackBerry 10 will be enough to bring them back into contention is a tough call at this point, but for now we have to look at what exactly the BlackBerry Curve 9320 brings to the table.read more →

80
TechRadar
RIM's latest attempt at a cheap-as-chips smartphone
What we like about the BlackBerry Curve 9320 is that it's honest. It's not trying to be better than it is and is quite happy to portray itself as a budget smartphone with a few little extras.

And for the people it's aimed at, those who want a phone that makes calls, sends texts/emails and has a good battery, it comes up trumps. Web browsers and cameras are nice to have, but won't swing a sale here. So on that basis, it gets a thumbs up.read more →

Write a Review
97
User Rating
Excellent
Based on 3 Reviews
Positive:
3
Mixed:
0
Negative:
0
90
abhilash
blackberry 9320
it is a very good phone but it lacks front facing camera all in all it is a very good phone
0
0
Add Comment (0 total)
100
hi
loooooooovvveeeee iittt
best phone ive ever had i like it better then my iphone i love everything about it !!!
0
0
Add Comment (0 total)
100
rahul
Great value for money
Good phone from RIM having all necessary features required for a smartphone along with the BBM experience.
0
0
Add Comment (0 total)
Write a Review
Discussions
Related Products
Related Searches
Compared With
Related Deals
Related News
Report
Search The Product To Add